I usually don't try to use blending machine to make my own drink or dessert, thinking that cleaning up is a chore... Hubby has bought the vitamix machine awhile ago. Seriously, it is an excellent machine for mixing and blending. He uses it for making sauces mainly, and always, the sauce turns out beautifully. But I had yet to try until now. 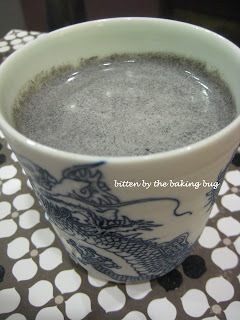 Last weekend, while clearing the dry goods containers, I realised there were quite some stock left.. nuts, seeds, dried mushroom, barley...  Then, I saw the sesame seeds and suddenly, I got a craving for sesame paste/milk. I recalled seeing an almond milk recipe recently... so I thought it was a good chance for me to try out the machine. The sesame amount I had was just nice for making black sesame milk. 1. Put black sesame seeds, glutinous rice and milk into vitamix blender and blend until resemble liquid paste form. (alternatively, blend the sesame seeds first, then add glutinous rice flour and milk to mix if blender does not allow blender and mixing)
2. Sift the liquid paste.
3. Heat up the sifted sesame milk on a pan over medium heat. Stirring until liquid starting to bubble.
4. When the desired consistency is reached, turn off heat, add in sugar to taste.
5. Serve warm or chilled. 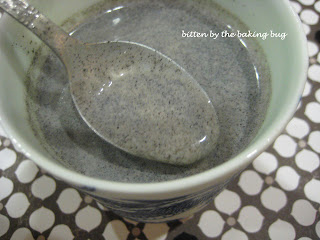 I tried 2 versions, one without sifting and one with... thinking that the unsifted one will have more texture and flavour. How wrong! The sifted one was silky smooth and rich and the taste was just right with enough punch of the sesame taste without any bitter or burned flavour.  The unsifted one was too 'sandy' to glide down the throat and has a bitter aftertaste. So step 2 cannot be skipped. 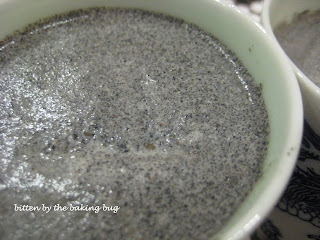 From the picture above and below, one can tell the distinct difference between the unsifted (above) and the sifted one (below). I ended up sifting the one above too. If there is any complain, the sesame milk has a slightly raw taste compared to the ready made ones in dessert houses. So the next time I make,  I will probably try lightly toasting the sesame seeds first.

I am submitting this post to Aspiring Bakers #20 Asian Dessert Buffet (June 2012) hosted by Moon of Food Playground.