Having tried making black sesame milk and realising that it is in fact quite easy to make Chinese traditional dessert at home, I proceeded to try making walnut paste using the same recipe the next day. 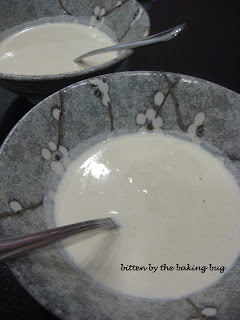 For benefit of those not familiar, walnut paste, almond paste and black sesame paste are popular desserts at Chinese dessert houses, especially those at southern China, Hong Kong and countries in South East Asia e.g. Singapore and Malaysia.

This time, I toasted the walnut slightly in the toaster before blending, taking lesson learned from making the black sesame milk. Since I was quite adamant about making walnut paste instead of walnut milk, I doubled the walnut amount. I also make sure that I sifted all walnut milk and boiled the milk slightly longer until it reached paste consistency. 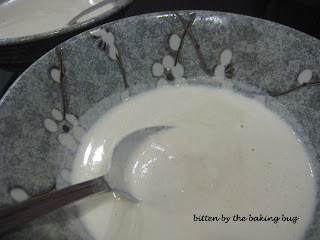 This time, in my opinion, the paste turned out better than the store bought ones. It was really silky smooth and unmistakeably 'walnutty'.... One word of caution, be careful of the portion as it is really filling, and bcoz it is good, not finishing the whole bowl is really a waste. Since I doubled the walnut amount, the leftover walnut pieces from the sifting process was quite a lot as you can see from the picture above. So not willing to let it go to waste, I tried making walnut pudding using a recipe I found online. The pudding turned out to be a disaster. From the photo below, one would have thought that it looks ok. It tasted quite horrible. And I ended up throwing all the pudding away, which is a shame. I will be on the look out for recipes that can make use of leftover nuts from now on :). 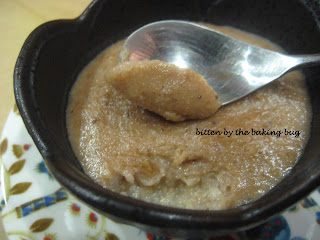